Last spring I worked very intensively with my Chinese colleague Sienna. During the GEC Conference we had time to really know each other. I really enjoyed working with Sienna. During this Autumn Sienna has been very busy: she has been trained by an International School. So we will continue our co-operation next year. We keep on WeChatting.
At the beginning of this November we got visitors from ZhongGuanCun nro 3 Primary School and from Beijing Capitol University. I took these five ladies to Oppimisen Fiesta -Conference where we had an opportunity to meet for example Finland’s former president Tarja Halonen. Teachers from ZhongGuangCun Primary School were very impressed! 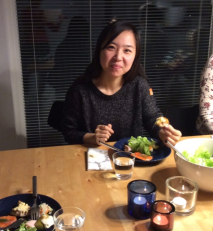 Teachers also stayed a whole day in our school SYK. They visited different classes and took part in teachers’ meeting. After teachers’ visit, a student from Beijing Capitol University stayed on my class for a week.
Liu Jia, alias Aleena, was very interested of Finnish ways to teach and learn. Liu Jia had lots of questions, she recorded and filmed her thoughts, she interviewed both me and my students from different grades. Liu Jia gave my students many presentations about Chinese School culture – we even had a face massage moment (as every schoolgirl and -boy in China daily have at 9.20 – 9.25 am.).
We also spend our weekend together; we visited Nuuksio National park, baked cinnamon buns, had sauna and dinner. I appreciate Liu Jia’s attitude: she was brave to taste everything!
I wish my colleagues in China a Merry Christmas and a Happy New Year!

Ps. My class will celebrate Chinese New Year at the end of becoming January..!

As the Christmas comes nearer the more my students work with Christmas decorations: they have cut snowflakes, panted our windows full of snowmen and they have made beautiful Christmas cards. We decided to send our Christmas cards to both Oulu, Metsokangas school and to Hankasalmi, Asema school. We hope our Finnish friends to have a Joyful and Merry Christmas!

In this update I’ll shortly tell you about the China co-operation which happened in summer 2016, the aims of the co-operation and specially of meeting the Chinese students. Co-operation brought up many new ideas, notices and particularly lovely memories. Making a short blog posting of this material has been slow – What not to write, because everything was so wonderful.

In spring 2016 three Finnish teachers got a Chinese teacher partner as their co-worker pair with The Global Innokas network. Our task as a co-worker pair was to plan and carry out a project which we first carried out in our own country with our own class and again together in the summer conferences in Peking and Shenzhen. The audience of the conferences had opportunity to follow the last lesson of the project and comment on it. The aim of the co-operation was to build understanding by using PBL (Project Basic Learning) to understand differences of cultures and to learn new aspects from each other concerning possibilities of collaboration.

Mine and my Chinese partner Kathy’s project theme was Kitchen Waste – recycling and reusing of kitchen waste. The theme was practical and actual enough, so it was also accepted in Kathy’s Chinese team. Our first project theme The Mathematical Forms was rejected by the team as a too abstract. For a Finnish teacher this kind of approval method was strange because we in Finland are used to making decisions more freely without any approval method used by the school management. On the other hand Kathy’s backup team did fine work for example in making teaching videos.

The students of both Chinese schools were absolutely sweet, brave and charming. The first meeting with the students of the Peking project class has remained in my mind especially well. There two future students of ours were running sweating from gym class in to our project class and one of them lifted a plastic bag full of recyclable kitchen waste on the table. Immediately without any hesitation we started to chat openly:

– What is your name and where are you hurrying form so sweaty? Oh, you have your recycling material already with your. What have you brought with you?

So, he started showing what kind of kitchen waste he had brought with him. There was an empty beer can among other things. The student told that he had bought the beer can on the way to school and that he had poured the beer on the ground. I wondered in my mind how a fifth grader has been able to buy beer. Kathy reminded the student that too much soda can be fattening. The open and joyful atmosphere of the meeting impressed me at once and I felt cozy and relaxed – this project will succeed.

The classes were delightful, where everyone participated eagerly and actively. The students used our common language English well and I understood that the knowledge of English had been one of the criteria to get in to this class and this project. Due to students good activity, possibly other criteria were good manners and working skills. During the teamwork it seemed that students had difficulties in sharing ideas and planning together, both of these had to be emphasized before starting to work and have a clarifying discussion on what common planning means. In Shenzen once I had to interfere in children’s tone of conversation and tell them that they lacked common understanding. I asked them to talk in English so I could help them. It looked that a member of the group didn’t want to take others in to consideration at all and others didn’t like the situation. There were also other similar situations in which you could see the children’s difficulty informing one common plan of the group. Many children had planned a fine plan of their own which their wanted to stick to and not to change it because of others’ opinions.

While working the children were able to ground their working finely and tell of their aims. They were eager to tell of their work thoroughly and theoretically. I might miss a bit more spontaneity and a braver desire to experiment. Was the perfection of the result the most important thing?

Outside the classroom children looked and giggled what we did and were very eager to help. While we were visiting the Peking school the learning street held there introduced the students’ fine work. As a presenter I got a boy of my project class who guided me by hand form one stand to another. There was almost a dispute of my attention – who will be able introduce his own work to me. Altogether the Chinese children performed briskly and talked loudly in front of the audience.

The most evident thought of the journey was how fluent it was to get along with the students and create interaction despite the differences between the cultural backgrounds. The Finnish and the Chinese school system perhaps approaches children’s capability and individuality from different goals, but despite them children are children anywhere in the world. A smile meets a smile!

The experience of the co-operation with the Chinese colleague was fine and successful! The experience of peeking the Chinese school system was amazing and eyes opening, without saying anything of all possibilities to meet all the friendly and helpful people who I met during the journey. Thank You!

The mystery skype turned out to be not so mysterious after all 🙂 The children from Rovaniemi recognized Anu from the springs Robo Cup -competition in Helsinki and the children from Espoo had read too well the papers on the classroom wall. For on the plan for this years activities and events said “Mystery skype Rovaniemi”. This plan was made in September when the Finnish Global Innokas teachers met in the University of Helsinki. So it only took about 5 minutes and we knew where the others are from. Last minute we remembered that Christmas was closing in and remembered to send greetings to Santa.

Work continued in each end. The children in Jalavapuisto Espoo were very interested in our new friends from Rovaniemi. How old they are and do they also study in a bilingual class. They enjoyed picking a friend to send a Christmas card to. These cards are now on their way and we hope they bring lots of joy to Ounasrinne school’s class 6C.