Our collaboration with students started with the games and the presentation about Finland. After these students made posters about the similarities and differences between China and Finland. The most popular similarities were four seasons, but the most popular difference was the lenght of summer time. About the school students were very eager to know that there is a free hot lunch in Finland, but in China they had to pay for their lunch. One of the biggest difference was the free-time that Finnish students have a lot and Chinese students only sometimes.

On the second time we met the students we played the Finnish game called “Juoru” (gossip in English). During that game students had to whisper to the next one what they did hear from the previous student. The main point of that game was to demonstrate how the sentence changed when it was told by many persons. The same thing happens with the gossips – they are not the same after many persons. 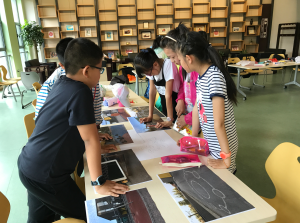 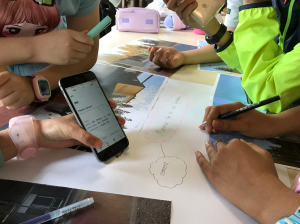 After playing students started to think about the basic knowledge of our playground equipment theme. In that case we used the method called “Learning cafe”. During that the groups of students moved from the table to another one and thought about the themes one by one. The themes were materials for the real equipment, materials for the model equipment, structures of the equipments, adjectives of the equipments of students’ dreams and places where to place designed equipments. During working students were allowed to use dictionaries and Internet to find translations and information. When every group had go through all themes, groups presented the ideas what was written down on the mind maps and we had a discussion about all themes.

Students designed their playground equipment by using the planning paper. They drew a picture of the equipment and wrote down the main details of it, f. ex. the height, width, the size of the model, materials for the real one and for the model and also they thought where to place their equipment in their own school yard.

When the plannings where finalized, students gave feedback to other groups. For the second time we used the method called learning cafe. After getting the feedback, students improved their plans.

After planning it was time to build the miniature of their own school. During our demo lesson students continued their work and build the playground equipments that they planned before.

The conference participants followed the stream of our lesson in the Hall of Achievement. During our lesson there was also a interpreter who translated our lesson into Chinese. After the demo lesson we teacher went to the stage, presented our project and answered all questions asked by the audience.

We also presented them a video that tells what we had done during the Spring in Finland and in Taiyuan. 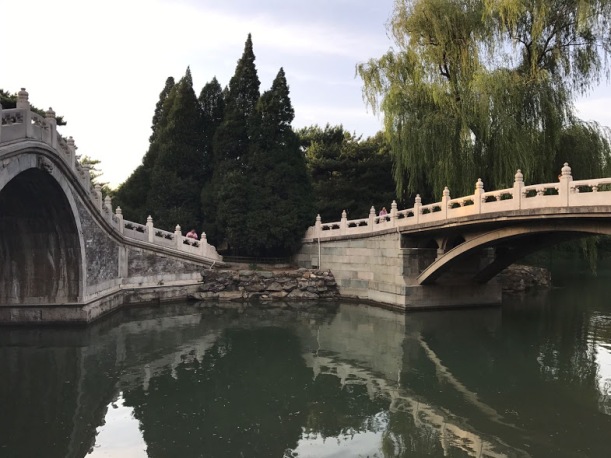 Global Educational Community and The Authentic Learning Institute held an international conference in Beijing on the 8th-9th June.

Innokas-Network had an important role by taking Finnish teachers to work and co-operate with their Chinese colleagues during the conference week. Before that teacher-teams had collaborated by planning and implementing projects on learning environments in their own countries. A few days before the conference teacher-teams met in Beijing and modified their projects. Moreover, Finnish teachers educated and supported their Chinese colleagues on the innovation process. The aim was to model Finnish teaching practices to Chinese teachers in authentic learning sessions.  To do so, there where Chinese students from different areas from China. Finally, teacher-teams gave demo-lessons to conference participants. The demos were reflected by the audience teachers and all the participants from the Beijing Normal University and Beijing Capital University and elsewhere. 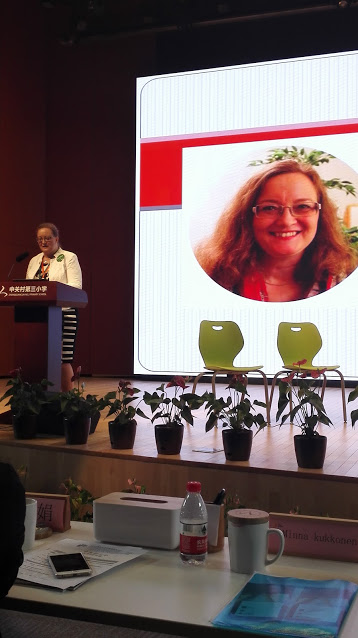 Minna had a keynote speech about the Finnish school system and new curriculum, Innokas network and teaching practices. The main points of her speech were the phenomena and project based learning, collaboration between students and teachers and students based learning.

Moreover, the Finnish participants took part in the radio interview about the equality in Finland, transversals skills, multidisciplinary learning units and Finnish school’s success in PISA assessment. They also discuss the learning outcome and the main point of the new curriculum and it’s affects in nowadays’ Finnish schools.

Our collaboration with Hong Kong started in August 2016. 1K-class from Jalavapuisto School in Espoo was happy to get a friend school called Holm Glad No.2 (The Mission Covenant Church Holm Glad No. 2 Primary School). Holm Glad No.2 has started an academy project called ‘Learning by Doing’. This project aims to change culture at the whole school level for example, by giving teachers s supportive school environment that puts people instead of grades first.

We have been emailing, sending pictures and videos telling about our class and school day whereas they’ve been telling about their school and taking us to ‘the trip’ around the town introducing their neighbourhood. And we also started a match ‘Checkers’ going on on WhatsApp between Hong Kong and Espoo.

We teachers have been chatting on Skype two times now. Listening to each others plans and hopes and of coarse getting to know each other better.We are going to go on our collaboration after the summer.

This far this has been rewarding yet challenging. We’ve been happy to learn about their culture which differs from ours quite a lot. Several emails and Skype chats have been a great way not only to get to know the teachers better but also their always optimistic way of thinking.

Linda Mattila from Koulumestari School in Espoo has also been working with Holm Glad No.2 with me. Planning and sharing ideas together has been a great help when thinking about this in all.

We had a great school day in March when we got two Fulbright visitors from USA. We don’t have visitors often so the children (and adults too..) were really excited and happy to meet them. We had planned water-themed workshops for the preschoolers and children in the first and second class. Also the children with special needs took part in the workshops. Overall we had six teachers and 50 students doing this project. The visitors were science teachers and they told me beforehand some very good tips for planning the day. 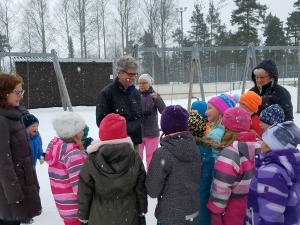 For many children it was a unique experience to meet people from another country because not so many of them have ever traveled outside of Finland. Nat and Stephen took part in the workshops doing the same things as the children. We found that nonverbal gestures are really international. The kids don’t speak English at all except some phrases. Especially I liked that Stephen and Nat went out with children and played with them. For example one of the preschoolers asked me what is kivi paperi sakset in English and when Stephen knew he meant rock paper scissors he was so happy to play with Stephen. The kids found out that the visitors also knew hide and seek.

We have been following spring coming to our village with SYK. It has been a really strange spring as you know. This year it has been snowing in May even in Helsinki. And suddenly we noticed that after few warm days we could find spring flowers near the school! My students wanted to send cards to those in SYK because the next autumn they will have a new teacher and I will continue cooperation with the new class. They also wanted to show what they have been learning in English lessons during the school year. So they filmed videos with iPads introducing themselves.